A Jewish Casket Invites the Elements 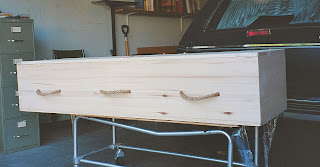 Did the carpenter who built this coffin bore holes into its base?

That's the question I had as members of the Portland, Maine, Jewish burial society wheeled the coffin above into the receiving paddock of a local funeral home, pulled off the protective wrapping, and invited me to take a look.

Orthodox Jews take a “dust to dust” view of burial, as advocated in that well-known verse in Genesis, and their coffins (when used at all) are thus crafted to allow for the ready decay of both the box and its occupant.

I'd seen plenty of pictures of Jewish coffins. This was my first look at a real one, which proved representative of the type. It had been fashioned from plain, pine boards and fastened without the use of any metal -- that is, non-biodegradable -- parts. The box itself was of a simple, plain make. No stain or varnish had been applied to the lumber; looping rope sufficed for handles.

The lid was split into two panels, which were attached to the body with wood dowels. When members of the society pulled out the dowels and lifted off the panels, they revealed the coffin's rough, unlined interior. There was no mattress or cushion to receive the body that would eventually reside here, no bedframe. This was clearly nothing more than a plain, pine box, a no-frills vehicle to quick decomposition.

I'd read in the course of my research that some Jewish coffin makers go one further for natural return: they drill holes into the bottom of their boxes to invite the elements, super-speeding the decay they'd already designed into their handiwork. 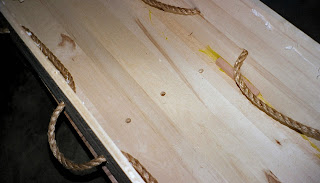 And the builder of this coffin, I saw as I looked inside it, had clearly done just that. If you look closely at the photograph above, you'll see the three holes he/she had bored into the center of the coffin base.

As the natural burial movement gains traction, it's beginning to offer families caskets fashioned from all kinds of eco-friendly materials, from cardboard to recycled paper mache. Most, if not all, are better for the planet than the sealed, metal caskets that are standard feature of the modern American funeral. Few, I would argue, are as truly green as this Jewish make above.

Back with a post on January 4th. Happy holidays.